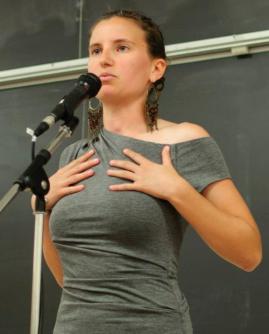 Natasha Huey is currently a teaching artist for Performing Arts Workshop and the American Graduate and Brave New Voices Associate for Youth Speaks. She works on the Raise Up Project, a national youth hip hop and spoken word contest to develop the conversation about the high school drop-out crisis. Natasha was introduced to Youth Speaks as a youth poet on the 2010 Brave New Voices team representing the Bay Area and has since served the organization as a Youth Poet Mentor and member of Future Corps before joining the staff.

Natasha is a graduate from UC Berkeley where she earned her degree in Language, Power, and Identity with a minor in Creative Writing. At Cal, she had the honor of Co-Directing UC Berkeley’s spoken word organization, CalSLAM, for three years. She was on the CalSLAM poetry team that competes at college nationals (CUPSI) for the past four years. At CUPSI 2013, she was awarded “Best Poet.” At CUPSI 2012, she was on the CalSLAM team that placed 3rd in the nation. On the Berkeley campus, she was also a Student Teacher Poet for Poetry for the People and the co-founder and co-facilitator of UC Berkeley’s only student-led class on slam poetry.